My last post mentioned the really interesting bimodal and alkaline nature of the magma system under El Hierro and the submarine vent system, and I promised I would provide some comparison to nearby Tenerife.  Tenerife also shows bimodal alkaline chemistry, so might provide some insight into the potential volcanic products that El Hierro and the new vent might produce over the next few million years.

The magma system of El Hierro is poorly mapped, but a geochemical study (Stroncik et al, 2007) did some nice work looking at crystal populations in erupted material to get an idea of the depth/temperature history of the various magmas.  They concluded that there were several high level magma chambers, as well as magma pooling in the upper mantle.  This would seem to tie in nicely with the seismic plots I’ve shown in the last few posts which suggest depths of magma in the 20-25km range (deeper than the ~12-ish km of sea floor and sediments typical of old oceanic crust).

The mantle-pooled magmas are most likely the source of the hot primitive basaltic materials.  If blebs of this are able to rise and pool in higher level magma chambers they will – over time – partially crystallise, and dissolve surrounding rocks, leading to a change in the residual chemistry.  If you have trouble following this, imagine a tray of slightly salty water which you place in the freezer.  As it cools down, small amounts of ice form.  If you constantly remove that solid ice, eventually what you are left with is a smaller volume of water with the same amount of original salt in it, meaning that the water left behind is much saltier.  Magma does the same thing, but with stuff like iron and magnesium being removed, and increasing concentrations of silica (SiO2) being left behind.

A very similar process has occurred with Tenerife, albeit over a longer period across a bigger island in a few more stages.  So – a potted geological history of Tenerife.  I should first of all acknowledge a few colleagues of mine (and their colleagues), – particularly Robin Gill and Matthew Thirlwall, who not only introduced me to the joys of Tenerife fieldwork about 12 years ago, but who also put together the excellent Geologists Association Field Guide to Tenerife.  That tome has served as a trusty accomplice in numerous field excursions to the island, and I have shamelessly used a couple of the map figures within it as the basis for my own illustrations used here.  So, hat duly tipped – lets press onward.

Tenerife lies about 100km East north East of El Hierro, and is one of the larger Canary islands.  The earliest subaerial material preserved on Tenerife is about 12 million years old (Ma), and the most recent activity in November 1909 at Chinyero in the North Western fissure.

The very earliest activity which built the Tenerife edifice was actually focussed around three separate  volcanoes (purple in the figure below).  These basaltic shield volcanoes formed a triangle upon which the subsequent island has formed.

These basaltic shields are made up of several hundred meters thickness of thin basaltic lava flows.  The image below shows a Google Earth oblique image looking North across the (westernmost) Teno massif.  Note the deeply incised valleys compared to the much younger material to the East, indicating the significant difference in age. 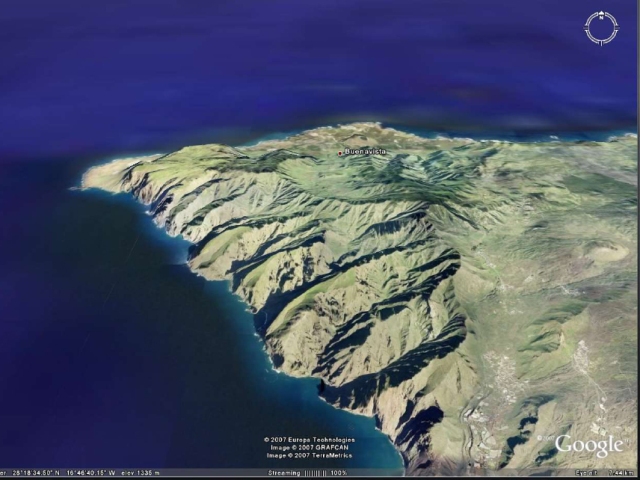 These shield volcanoes are build almost entirely of individual lava flows less than a meter thick (about 30cm in most cases).  The following photo is taken from inside Masca Canyon in the centre of the Teno massif, showing the structure of the basalt flows, with many vertical feeder dykes cutting through.  The photo is actually taken from a central point in the massif, with all beds dipping radially away from shot.

Perhaps the most impressive view of these beds, however, is available from Los Gigantes.  This ~500m high cliff section shows not only several thousand stacked flows, but also sections through a number of fissure vents, numerous feeder dykes, and generally some awesome geology.

Once these three basaltic shields had built up and eventually converged into a single island, an intriguing change in volcanic activity occurred.  About 3 million years ago the chemistry changed.  No longer were basaltic shields dominating the activity, but instead a new more silicic evolved magma started to dominate.  Not only that, but the centre of volcanism moved to a point between the three shields volcanoes.  What began was the build up of what is now known as the Cañadas edifice.

Rather than basaltic shield volcanics, composed of laval flows, a new composite cone was  constructed through a combination of viscous lava flows and explosive ash-generating eruptions.  The phonolitic/trachytic melts were derived from – presumably – relatively long lived high level magma chambers, in much the same way the trachytes of El Hierro are forming.

The Cañadas edifice is impressive, with the central modern peak of Teide reaching about 4km above sea level (a panoramic view of which can be seen at the very top of this blog).  Perhaps more impressive is the way in which it has behaved over the last million years or so. Tenerife still bears the scars of those large explosive eruptions, in the form of a caldera. 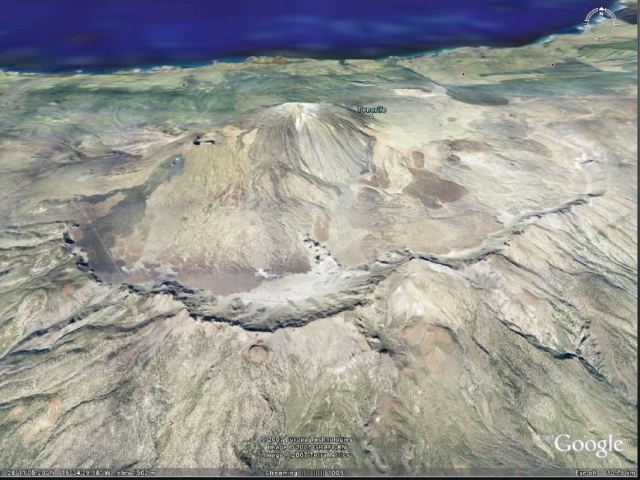 View North across the peak of Teide, lying within the Canadas caldera.

At approximately 15km across it is the remnant of a series of eruptions which have deposited a thick blanket of pyroclastic materials across the island – particularly well preserved in the South across the Bandas del Sur.  Here are a thick sequence of ignimbrites and fall deposits, including individual pumice fall beds up to 4 or 5 m thick – the total ejected volume from the caldera is estimated to be in the region of 140 km3

So the geology of the island in the present day looks something like this:

The modern activity has been focussed largely in three places; within the central caldera, along the northeast/southwest running dorsal cordillera, and along a fissure system in the north west of the island.  Interestingly we see a bimodal eruptive style even now.

In 1705, to the East of the caldera as it joins the Cordillera Dorsal, a fissure eruption occurred, forming what is now known as Volcan Fasnia. 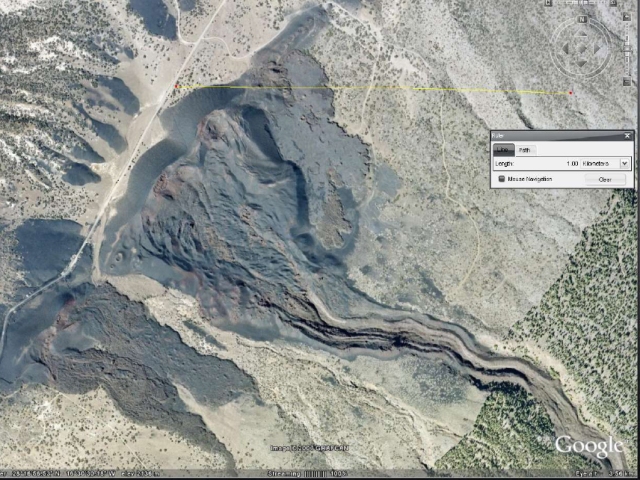 This linear eruption built up spatter ramparts of scoria, typical of what you might see in parts of Iceland and Hawaii. 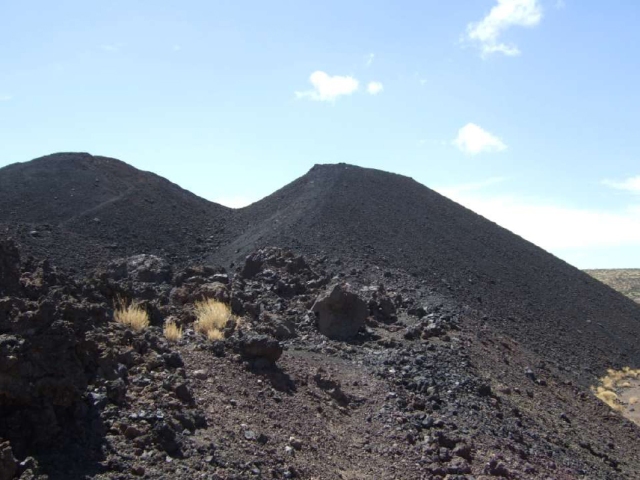 So we have scoria forming high temperature mafic eruptions, as well as pumice forming felsic explosive eruptions.  And guess what?  They were both happening at the same time. 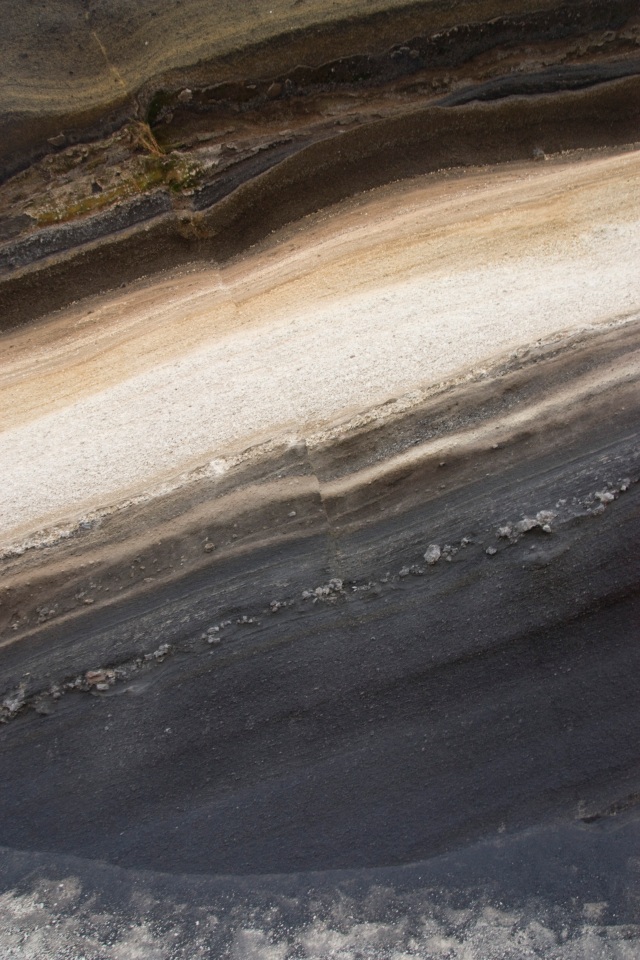 This image shows a 2m section through an exposure in the Cordillera Dorsal, in which a (white) pumice fall from the felsic explosive caldera eruptions is interbedded with (black) scoria from a closer mafic cinder cone eruption.

And demonstrations of bimodal simultaneous eruption don’t get much better than that.

5 Responses to A Canarian comparison