Today is the day that Expedition 35 return from the International Space Station. Later tonight they will climb into the docked Soyuz capsule, and perform a re-entry back to Earth, bringing to an end a truly phenomenal period of public engagement with the ISS, driven largely by the incredible content provided by Commander Chris Hadfield via his Twitter stream. 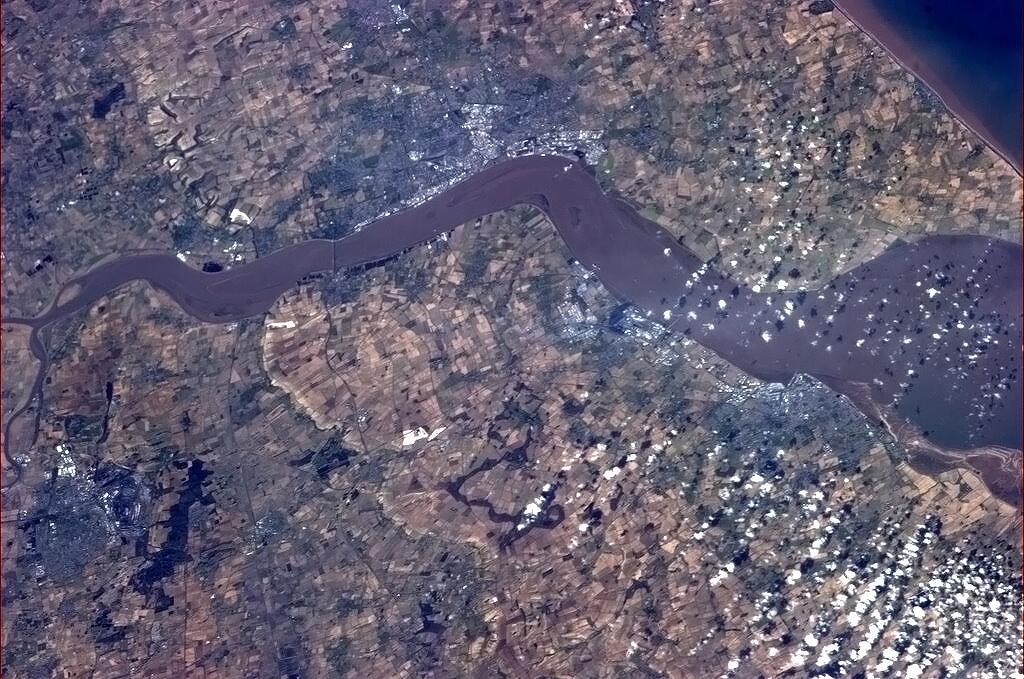 Clouds demonstrating the very British art of queuing over Hull, 12 May 2013. C. Hadfield.

Slinging aside the (often justified) criticism that Twitter is mostly banal we’ve been treated to months of photos and commentary, giving a more humanised view of our planet than could ever be achieved by even the Blue Marble image taken by the Apollo 17 crew. Tonight that stops, and the world is a poorer place for it.

I struggle to think of a single science engagement activity which has had anything like the success that Commander Hadfield achieved on this expedition. The Twitter posts and images caught peoples imagination, and the numerous videos and broadcasts that he has since been involved with draw people into contact with day-to-day life on the ISS like nothing else.

In my free time I help moderate the reddit forum /r/Askscience – a place where experts from across the spheres of science can answer any question that any user cares to ask. As a result of Hadfields work, the subreddit has seen an unprecedented number of questions regarding life in space, space engineering, and similar themes. There’s been loads. He has generated the kind of outreach which rather than just being passive listening, has genuinely peaked peoples curiosity and interest. It’s the kind of outcome that every teacher in every classroom in the world aims and hopes for. It’s the kind of engagement that encourages people to pursue and kindle an interest in science and technology that leads to new scientists, and a wider public understanding of science.

20 years ago I was able to participate in a conference video call with the JASON Project as they explored part of the ocean – we were able to hear directly from the crew and science team, and pose questions to them. It was a fantastic experience, but available to a lucky few – approximately 100 or so of us drawn from dozens of schools in the area, crammed into a small lecture hall at the nearby US Airbase at Mildenhall. That is now an experience which millions have been able to share. The opportunity to directly connect with an individual or team doing something amazing.

The tragedy really is that Hadfield is the first to really take this potential so firmly to hand. That he is personable, funny, and an excellent communicator helps enormously. A guitar-playing photojournalist astronaut I think possibly confounds many of the assumptions the general public can hold about the people, while the content he’s provided has enabled a discussion that communicates the mission far more broadly than has been achieved before.

With this high profile mission coming to a close, there are now a number of opinion pieces appearing – some of which ask the question “but what is it good for“. It’s a question that is always worth asking – my only hope is that the scientific and science-supporting community can step up to the plate and vocally provide the broadside which Hadfield himself is championing: “We’re not going to do it tomorrow and we’re not going to do it because it titillates the nerve endings. We’re going to do it because it’s a natural human progression.”

The ISS suffers the same problem that impacts much of science, and that is one of voice. The real power in democratic systems is held by politicians, and the voices they listen to. The voices they listen to are frequently driven by the journalists and editors prominent in that society. And as Mark Henderson pointed out in his excellent book The Geek Manifesto, the overwhelmingly vast majority of politicians and journalists have absolutely no science training whatsoever. They are simply not trained to grasp the incremental and long term development that cutting edge science so often requires. Couple this with the short-term nature of political career interests, significant sustained projects like space exploration and large scale blue-sky research will find themselves in the same cross-hair.

The solution is simple. Be vocal about how important we think these things are. Get your friends to be vocal about it. Help politicians and journalists, and the rest of the public understand *why* it’s important.

That’s why Expedition 35 has been so brilliant – Hadfield has provided an astonishing role-model in (among many, many other things) how you go about making *everyone* understand how amazing the ISS is, and how important the work there is to pushing forward any kind of future manned space travel. So thank you Commander Hadfield, I will miss being reminded several times a day that a group of human beings are flying at 7.7km a second over our heads, and are enthusiastic in communicating directly with any member of the public about what they do, how they do it, and why we should keep on doing it.

I’ll leave you with the already widely circulated but nonetheless brilliant farewell to the ISS Hadfield posted this morning.